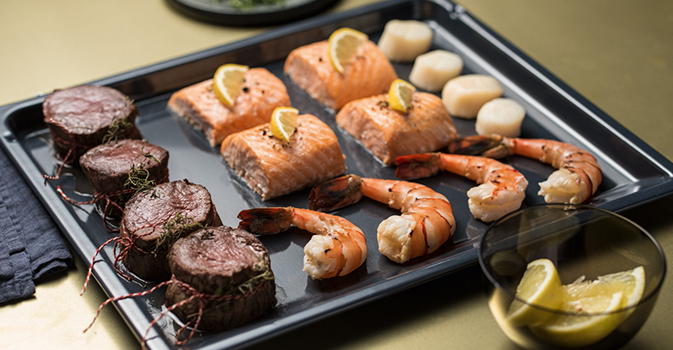 13 September 2017, Johannesburg:  Cooking fish in a block of ice or a fillet of veal in a jacket of beeswax without the ice or the wax melting? The time has now come for Miele to reinvent cooking – with the world launch of the new Dialog oven. Says Mercia de Jager from Miele: “For the very first time ever, a technology is being deployed in which electromagnetic waves respond to the texture of food in an intelligent manner. Meat, for example, is cooked more uniformly, retaining its juices. Fish and vegetables keep their fine structure and dough rises significantly better. Various fresh ingredients for a complete meal can be placed together on an oven tray and are all finished to perfection at exactly the same time – and up to 70% faster than using conventional cooking methods.”

From the outside, the appearance of a Dialog oven is identical to that of its conventional counterpart; on the inside, the Dialog oven opens up a whole new world of cooking, baking and roasting pleasure. Says Mercia: “At the demonstration, there were many examples of this amazing technology that left all of us baffled. One such example is an uncooked fillet of fish embedded in a block of ice, which is placed in the Dialog oven. The result: The fish inside the ice is perfectly cooked, whilst the ice itself remains frozen.

“No less impressive as it is inconceivable is this example: Take a leg of lamb and place it on a bed of vegetables consisting of red peppers and green asparagus. Fill any remaining space with potato wedges and place the tray in the Dialog oven. After around 45 minutes, the lamb comes out succulent and evenly cooked, the vegetables are slightly al dente and the potatoes deliciously soft – without any interruption or the need to introduce additional ingredients. It would be impossible to cook this dish in a conventional oven with such excellent results and in such a short space of time. Similarly, such dissimilar ingredients as salmon and puff pastry – a combination of tastes made in heaven – can be cooked simply, fast and in only one single operation!”

So how does it work?

The broad range of applications and the quality of results stem from Miele’s exclusive M Chef technology. This technology applies electromagnetic waves to the food, which creates energy for cooking. These electromagnetic waves are very different to those used in a microwave oven – they apply much lower levels of power, and use a broad frequency spectrum instead of just one single channel. The Dialog oven features a modular unit that generates electromagnetic waves in a specific frequency ranges and distributes these in the oven via two antennas. As the molecules in food are arranged in different ways and even rearrange during the course of cooking, continuous adjustment of the frequency supports the cooking process. The same antennas also provide the Dialog oven with feedback on the amount of energy that has been absorbed by food. As a result, all the various items in the oven are cooked to perfection and all at once. Remarkable!

Excellent results thanks to M Chef in combination with radiant heat

A further significant advantage of M Chef accrues from the fact that food is cooked volumetrically, explains Mercia: “For instance, a fillet of meat is cooked uniformly pink throughout; from the edges right through to the core. In a conventional oven, this is much more difficult as heat always travels from the outside to the inside – so, when the core is done to perfection, the outer layers are often already overdone.”

As cooking with electromagnetic waves does not brown the surfaces of food, bread for example, can be baked entirely without a crust. “Now you can bake brightly coloured rolls for example, as the colour won’t brown, but remains vivid once baked,” notes Mercia. For a classic loaf of bread and the roasted aromas in meat, M Chef technology always combines with radiant heat. In this respect, the Dialog oven is ideally equipped as it offers many features of Miele’s flagship cooking products, including a user-friendly M Touch display and pyrolytic self-cleaning. Elegant and uniform illumination on all levels is guaranteed for the first time by high-quality LED lighting called BrilliantLight.

Taking cooking into a new era, the Dialog oven's connectivity promises inspiration and additional cooking pleasure. The recipe feature included in the Miele@mobile app represents an ideal starting point for experimenting and trying out new ideas – offering users numerous automatic programmes developed specifically for this new oven. Alongside food preparation videos and shopping lists, the app also allows the parameters of a recipe to be transferred directly to the machine. Says Mercia: “This function puts users in direct contact with Miele's laboratory kitchens – tested recipes which meet with their approval are available as downloads for budding chefs virtually immediately.”

Users of a Dialog oven will find themselves confronted with two new concepts: Gourmet Units and Intensity. Gourmet Units serve as a unit of energy applied to food, whereby one Gourmet Unit corresponds to one kilojoule. Intensity settings are “high”, “medium” and “gentle”. For most foodstuffs, “high” is the correct choice; “gentle” is the ideal setting for delicate dishes such as soufflés for example. You can also use the “gentle” setting to defrost  dishes in the Dialog oven, that before were too delicate to defrost using a microwave – such as a delicious cream cake for example.

Use of this new appliance is made simpler by automatic programmes, without stifling the users’ own creativity. For greater individuality, there are two options open to experienced chefs:

The Dialog oven is due to be launched in European markets in 2018, and it is expected to be available on South African shores in 2019.

For more information about the Dialog oven, visit https://revolutionaryexcellence.miele.com/en/dialog-oven

Released on behalf of Miele (www.miele.co.za) by The Line (www.theline.co.za).

Call or email us if you have questions or requests. We will be happy to assist you.